Home » farm life » If a Tree Falls in the Driveway and…

If a Tree Falls in the Driveway and… 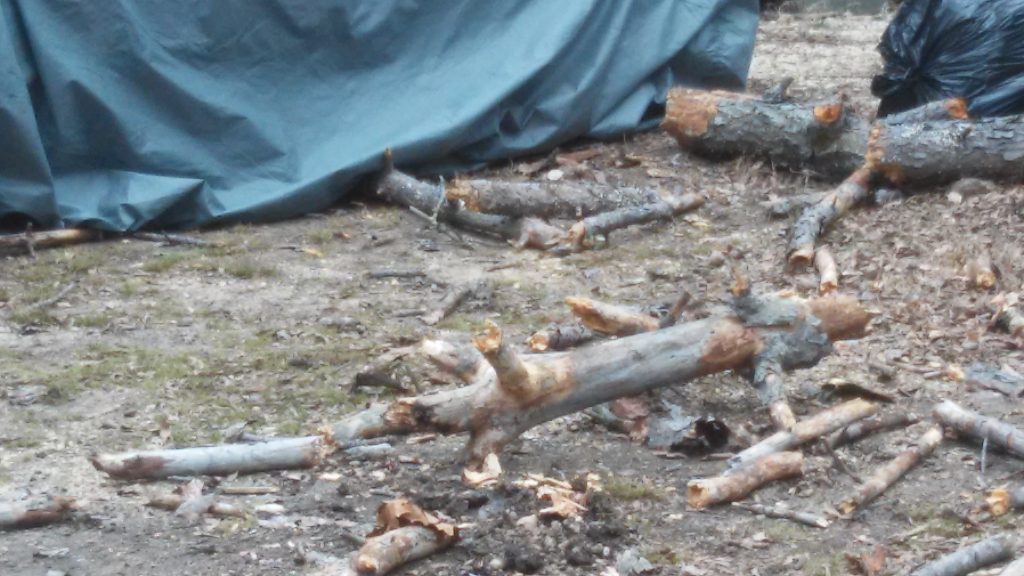 It was loud. The blue tarp is Jr’s car, he was very relieved to know there was no damage.

For a while now I have wanted to build a hugelkultur bed and since the top of the pine tree fell very near to where I was planning on digging the bed, I took this as a sign. A sign that if I got digging I would only have to move those logs once.

Hugelkultur is talked about quite a bit in permaculture circles, but basically, it means a raised bed with rotten/rotting wood as the base. My interest in these comes about from my compost obsession. I compost everything I can get my hands on, but if you add sticks to a compost heap, turning it over becomes difficult. Sticks in a pile break down eventually, but it is so slow that honeysuckle and other vines grow through the pile and so you never really get the benefit of it. I want broken down, composted matter that I can add to the growing areas, not clumps of impenetrable honeysuckle and greenbriers, so burying the sticks in the place I want the organic matter was something I felt I needed to explore.

I had already chosen the area in front of the greenhouse as I want to add a cold-frame in the autumn to extend the growing season and I wanted to make that area look a little nicer. An edible flower bed. That is, a bed of edible flowers, seemed ideal.

It took me a while to dig the initial hole. I was going to pretend I did this quickly, but Jr moved his car so I feel I should admit this picture was taken the next day. The hole is 3′ by 10′ by about that deep. I loaded all the removed soil into the large black tubs on the right of this picture.

Then I filled the hole with all the logs. I tried to keep them as even as possible, using the back edge of the axe to knock off the branches and to break some of the bigger pieces. The tree had been dead for a while so the wood was partially rotten and made for much easier work than using fresh logs. I managed to fit in all of the fallen logs and branches.

The next step was putting all of the removed soil back in on top of the logs. My steps are not necessarily those outlined in the various permaculture classes. For one thing, I had no sod to place upside down in the bed – this area had been a popular chicken sunbathing area for years, it was all bare soil and chicken bathing holes.

Karl added a row of cinder blocks around the edge of the hole and I added the soil – it came up to the top of the blocks but I forgot to take a picture.

Rain was forecast for the next day, so I took a break and hoped the rain would settle the soil and leave me some room to add compost on top. It rained, but nothing really settled so I just added the compost anyway.

We will add a wooden frame to the top for the coldframe, but my edible flower hugelkultur bed is ready for planting.